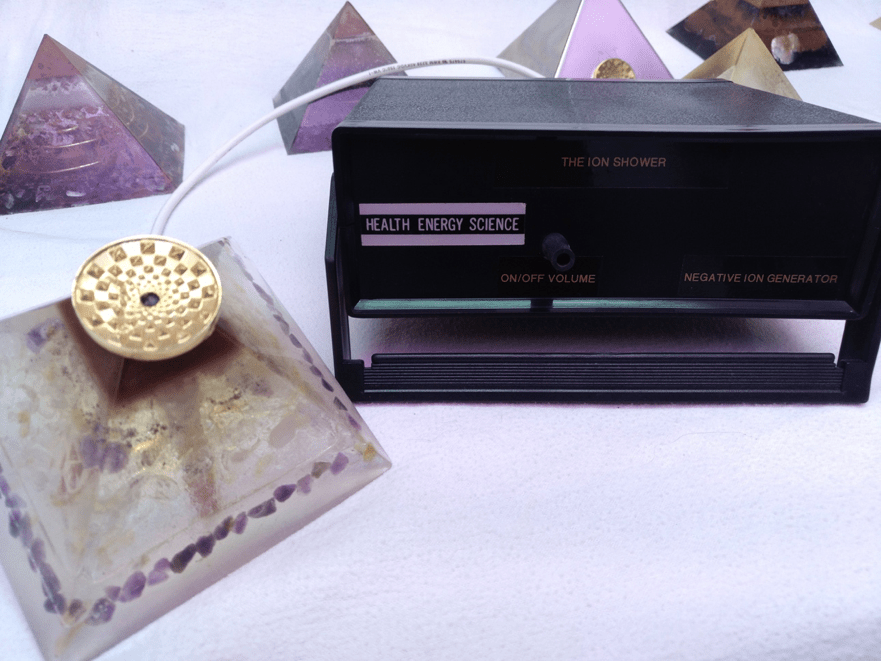 Based on Dr. Fred Bell’s original Negative Ion Shower technology with a few added features. Every unit is custom built. Comes with a Tesla-Coil inspired power supply. Integrated with Orgonite technology. Contains ORMUS and other rare earth materials. The Ion Bath may help to detoxify the carbon monoxide poisoning from automobile exhaust fumes and other daily pollutants which can make our bodies acidic and prone to sickness and disease. The benefit is a complete auric cleanse, referred to as “Aura Scrubbing”. It is a true healing modality intended to cleanse and rejuvenate the entire body on all levels. The Ion Bath does not produce Ozone.

The negative Ion Bath detoxifies the carbon monoxide poisoning from car exhaust fumes and other human-made pollutants, which make our bodies acidic and prone to disease. These include a vast array of chemicals and preservatives found in our foods, such as MSG, which The Ion Bath rids from your entire system within 90 seconds!

Usually, the process of carbon monoxide detoxification takes a MINIMUM of 24 hours, assuming no other toxic substances have entered the body during that time. In our day and age, that is an almost near impossibility.

The benefit is that it is a complete auric cleanse, also referred to as “Aura Scrubbing”. Its most authentic nature is an intense healing device intended to cleanse and rejuvenate the entire body on all levels.

For full benefits, use the Ion Bath no longer than 2-3 minutes twice daily. It will fill the entire room with charged ions!

What does it mean to have holes in my aura?

To have holes in your aura means that you have incomplete nerve passageways resulting in the body fails to ground since the body is electrical, as seen by Kirlian (Aura) Photography.

What if I have holes in my aura! Will this help me?

Yes. Holes in the aura are caused by blockages from the use of prescription drugs, “street” or “recreational” drugs and even major surgeries, physical disabilities and mineral deficiencies. The Ion bath can help repair and restore the entire body on a cellular level deep down to the DNA level.

The pollution, toxins, drugs, ELFs, and general human-made character projected into humanity are detrimental to man’s superphysical being. The result is o suppressed conscious awareness of one’s God-given creative abilities and effectively controls your energy levels.

The Pleiadean structures allow the body to correct itself by reintroducing the proper frequencies and waveforms. Originally used to stimulate the creative process by placing a gemstone in its transmitting section and then putting it on your desk or workplace, The Ion Bath utilizes a small negative ion generator. The scalar energy behaves much like sunlight and intensely speeds up healthy cellular reproduction in an incredible way.

“This is why l think Ion Bath is a vital tool for those who live in cities where the air is less than perfect. The Ion Bath utilizes an extremely high output Tesla negative Ion generator coupled to a highly modified Solar Orb. When you stand under it, it flushes the aura in a way that vitalizes the entire cell structure of the body, which then liberates the trapped poisonous gases that find a way into your system during your short mission out into the world of noxious fumes.” – Dr. Fred Bell on The Ion Bath found in “Rays of Truth – Crystals of Light”.